“The idea was to incite a war between the provinces and remind fans what’s at stake –we were truly blown away at the impact, within the first hour of the billboards going up fans went crazy” Says Dave Nash, Sugar&Partners creative director.

Unbranded opposition billboards were dropped into nine key provinces around the country and the billboards were shared on the Provincial Union’s Facebook pages sparking instant outrage and hunt for who was responsible:

Have you seen this?! Taranaki Rugby have put up this shocking billboard on our turf! We MUST have it changed and need…

Posted by Bay of Plenty Rugby on Tuesday, 1 September 2015

What the?? Who’s seen the Taranaki Rugby billboard near the stadium?! We are looking into who is responsible and…

Have you seen this?! Bay of Plenty Rugby have put up this monstrosity on our turf! We're petitioning to have it changed…

Not impressed. Here we are prepping for Canterbury tomorrow & Taranaki Rugby go an pull this stunt on our territory! We…

Maaaaate! Those Stags are having a laugh….Check out this dusty looking billboard that Rugby Southland parked outside…

Can you believe it!?!? Those cheeky buggers at Otago Rugby have initiated war! Look at this monstrosity outside KFC Dee…

What the!? The Tasman Makos have put this up over on Devon St! It's gotta go… we need your support. We need to get…

Have you seen this?! Bay of Plenty Rugby have put up this monstrosity on our turf, even though we beat them on the…

WHAT THE? Have you seen this?! Canterbury Rugby have put up this monstrosity on our turf! We're petitioning to have it…

Once the original posts had hit fever pitch the billboards were replaced with a defaced versions supporting the local teams.

“It’s just human nature to capture and share something that is a bit out of leftfield, getting to the heart of these age old stoushes was the key to the campaign taking off” adds Damon O’Leary, Sugar&Partners creative director

The campaign amassed over 81,000 likes, shares and comments engaging an audience of over 2 million on Facebook alone.

The major success of the campaign was that over 30% of the social media audience reach was organic, due to the billboards really hitting a nerve and unpaid broadcast media like Tony Veitch, Radio Sport and The Crowd Goes Wild picking up the activity and adding their spin. 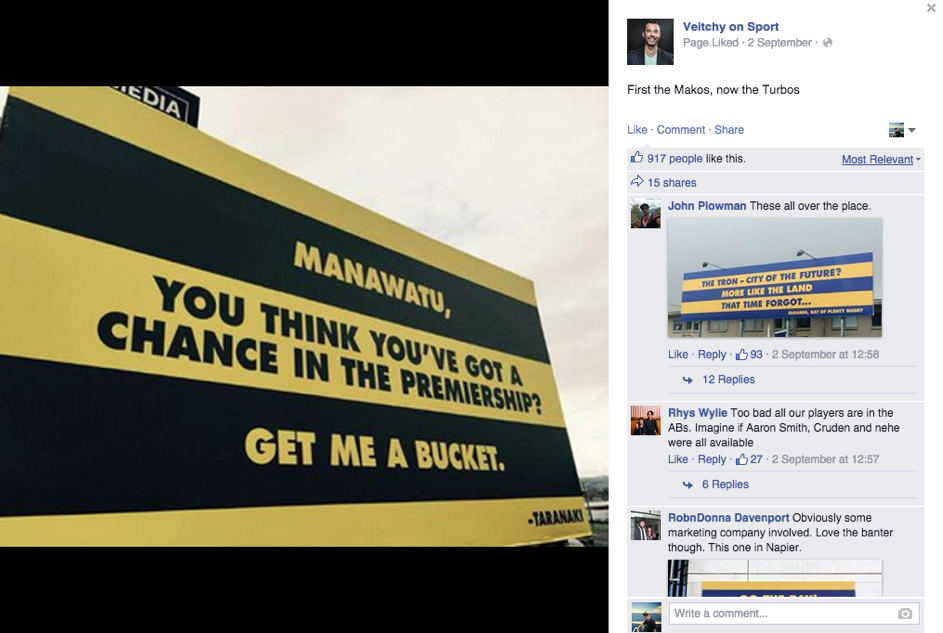