The attention economy – a state of convenient denial

We’ve all seen these pie charts that show what happens on the internet in any given minute around the world. The numbers can sometimes be too incredible to fathom, like 80k hours of Netflix or 16 million txt messages or 156 million emails – all of which take place within 60 seconds. 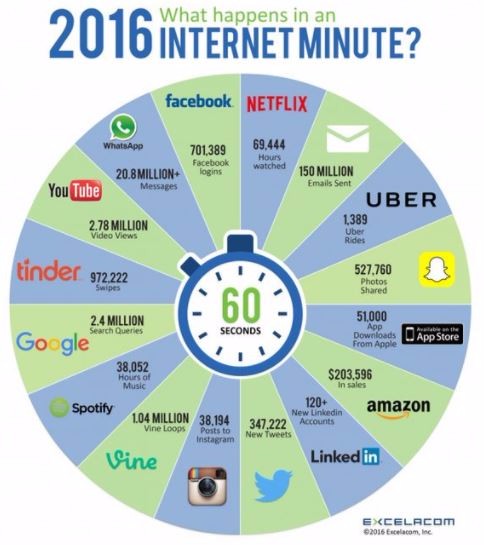 Every year the pie gets fatter, the slices get richer, and the numbers get bigger and bigger. The only thing that remains the same is time.

The more connected we get, the more content we consume and create, the more we feed back into the pie and draw more people to it. However, time remains the only constant factor in the equation. Minutes have become the currency with which we trade. And, making a choice of what content to consume has become a bigger decision, because whatever we choose to watch, read or listen to has become a commitment. It no longer means just consuming a piece of content, but also putting off a million others for a later time.

Think about it, Netflix seems to be releasing a new show every week, Spotify is adding thousands of new tracks every day, your social media feed will literally display new content every single time you refresh it.

So, what does this all mean?

It means that advertisers and content creators are now trading in an attention economy that’s never been more challenging in the history of our kind. The onus is no longer on the script, the production quality or however much money or resource we put behind a piece of content as much as it is on the content’s ability to grab attention and hook its audience.

We often worry too much about the aesthetics, the layers of messaging, the big strategy that fuels the work, and an array of other things that make up the building blocks of the work. But the reality is, it comes down to the context in which that work is being consumed by its audience, and whether they choose to grant it their undivided attention. We must probe the circumstances in which the content would be consumed. For instance; is it a Facebook video appearing on a commuter’s smartphone as he/she scrolls down their Newsfeed at the speed of light killing time until they reach their stop? Is it a display ad appearing in the corner of a webpage on a middle-aged mother’s iPad as she glances at the news of the day while watching Netflix with her partner on the big TV, all the while trying to block out the noise coming from the children’s Minecraft videos in the other room?

These scenarios are nothing extreme or out of the ordinary, but the common behaviours of everyday people whose attention is constantly stretched too thin with content that’s, frankly, as good as anything we can create or better.

So, what should we do about all this?

Move the attention factor to the top of list of all the building blocks of the work. Prioritise the “hook” within the creation process and let it inform the art and the production of content. Do just the same with media, and let the attention challenge inform the science behind your choice of channel, your placements and your timing. Start at the end of the road and walk back to the appropriate starting point. In other words, start by thinking of that mother multi-screening between iPad and TV at the same time, and think of what she needs to see to take her away from all the distractions.

Last year, a small bookshop in Texas recognised the attention challenge. They understood that being a brick and mortar bookstore in the digital age is a challenged business model. They knew that the people they want to sell books to are spending most of their time staring at their phones and scrolling through social feeds. So, they flipped it on its head. They allowed the attention challenge to become the inspiring thought behind their idea.  They spoke the people’s language before asking them to speak theirs. The results were outstanding. Check it out: https://www.facebookawards.com/winners-gallery/2017/na/winner/litbaits.html

Many digital channels have already started on that journey of shifting their strategies to put more weight on the value of attention. Facebook says an average user spends about 1.7 seconds looking at a post before they scroll right past it. For that reason, they’ve developed targeting technologies that effectively allow content distributers to target people with longer attention spans based on their scrolling habits, amongst other things. They’ve made all their videos auto-play in hopes that seeing a split second before a user scrolls past can be motivating enough to stop and watch the whole thing. They preached advertisers for over half a decade about creating “thumb-stopping content” and prioritise the attention challenge.

But on the other hand, you still hear statements like; we’ll get the creative right first, and think of the channels later, or we’ll shoot the ad now, and cut up some digital pieces later. While many have been ahead of curve for a while, there’s a lot still that are stuck in a state of convenient denial. Change was never easy, and it never should be. But the reality is that the people who we want to show our content to have a range of other sources and devices competing for their attention. And, the circumstances in which they make the decision of what to consume and what to skip are just as important as anything that informs the content creation and distribution process.

In a nutshell, people are constantly scrolling away through an endless supply of options, whether on their phones, tablets, TV or whatever they’ll be using next week. Our job, in old PR terms, is still to cut through the clutter – only thing is; the clutter should now be as much a source of inspiration as anything else in the process.